Central antenna is one of the most popular and popular systems in buildings and towers that have a high number of units.

Typically, such buildings can not be used for each unit of an isolated antenna, which causes problems such as: 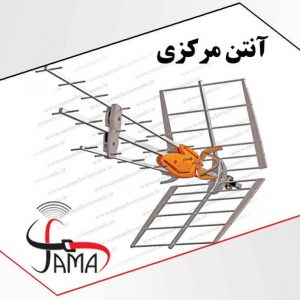 Limited roof space to install a large number of antennas

The reflection and induction effects of the antennas on each other

The high volume of cables used from antennas to receivers

The proposed SAMA Electronic solution to solve this problem is to use an antenna for all receivers, and since the signal received by this antenna is not sufficient for receivers, therefore, we use equipment to increase the amount of signal and distribute it among the receivers.

This solution works with the use of central antenna systems (MATV) (MASTER ANTENNA TV).

Branch Antenna: One of the requirements of the central antenna system is to receive signals from the transmitters.

Amplifier: This device amplifies the received signals and sends it to the receivers.

splitter or tapping: It is a signal distribution device and is used to isolate the signal for each receiver.

Cable: An internal conductor and has the task of passing the flow.

Connector: It is used to connect different parts of the central antenna system.

Modulator: A device for transmitting images in the central antenna system.

Outlet: The receiver is connected to the central antenna and used to receive the signal.

Samaelectronic Company is highly specialized in this field and, in line with its customer orientation, uses high quality equipment and experienced experts in this field, and one of the prestigious companies In this regard.